Last week I talked about being bold yet realistic (and realistic doesn’t mean being unambitious!) about your goals. Bold and realistic are the two words which I want to describe my goals for 2016. Bold, because you all know I like to dream and give my all towards a goal; realistic, because this will not be the year of a 1:29 half marathon or hiking the entire Pacific Crest Trail, even though those goals do appear on my lifetime list.

Naturally, I have goals beyond this list, since life consists of so much more than running. I want to volunteer, expand my freelance writing portfolio/have work published on some major sites, read more, in addition to other goals.

Each month I’ll check in and share my progress on these goals, and I thank all of you, my wonderful readers, for all the support you’ve already given me! I love this community and am utterly and deeply grateful for each of you, especially your kind and supportive comments on yesterday’s post! 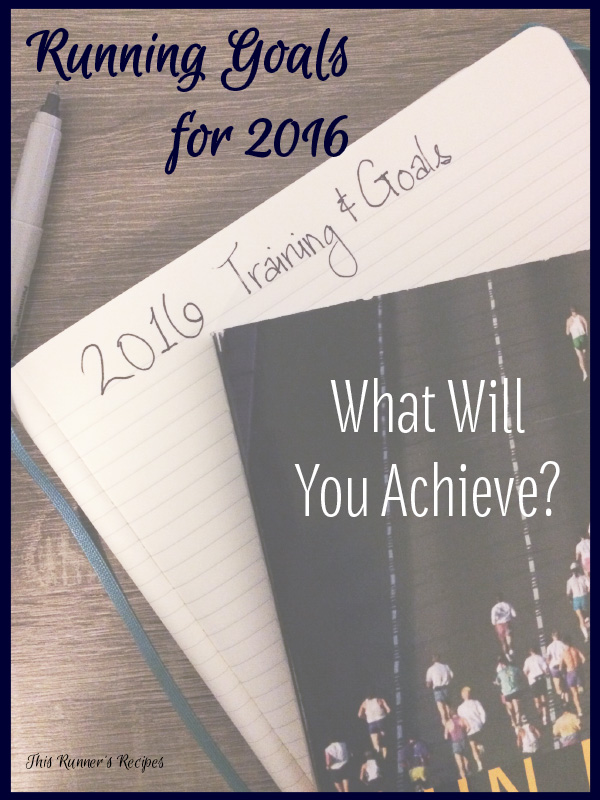 I want to also hear about your goals and how I can help you achieve them. As I’ve said before, the sole purpose of This Runner’s Recipes is not about me; it’s about helping other runners overcome perceived limitations, train smartly, and run their personal best, whether that personal best is finishing their first 5K or qualifying for the Olympic Marathon Trials. In addition to all these personal goals articulated below, one of my tops 2016 goals is to help YOU achieve your goals.

This was on my list of 2015 goals and I did not achieve it. I only raced one half marathon in 2015, but there’s a nearly year-round stream of half marathons on the Eastside of Seattle, which lends well to pursuing this goal. The Lake Sammamish Half is my goal race for the spring and I’d be thrilled to get as close to 1:39:xx as possible there. It’s an ideal race for me: cool temperatures and a flat course.

Additionally, I intend to sign up for the Leavenworth Half Marathon in early October. The fact that this race is the opening event for the Leavenworth Oktoberfest only makes me want to run it even more. Leavenworth is a net downhill race, so it could be a good one for a PR, although I probably won’t train hard for it, as the focus then will be on hiking.

PR in the Marathon

Maybe this PR will punch my ticket to Boston, maybe it won’t (or perhaps it will and I still won’t get into Boston). Regardless, I would like to a strong and faster marathon at the Jack and Jill Marathon in North Bend, WA in July. The race is net downhill and, even though it’s in July, it’s in the cool mountain air, so it could be a good BQ course, but if I learned anything at the Portland Marathon, it’s that so many obstacles can arise over 26.2 miles. Instead of setting my sights on a very specific time goal, I want to run a personal best, which is so much more than just a time, not a best according to an arbitrary and external standard.

Hike the Snoqualmie Pass to Stevens Pass Portion of the Pacific Crest Trail.

If you’re a regular reader, then you know Ryan and I caught quite the hiking bug since we moved to the Pacific Northwest in May. The Snoqualmie Pass to Stevens Pass portion of the PCT spans 75 miles and 16,000 feet of elevation gain. The logistics of this one will be a bit difficult and we will need to make sure we carve off enough vacation time for this, but Ryan and I are both itching and eager to hike this. After watching Wild and following one of Ryan’s college friends on social media as he hiked the entire thing, neither of us can stop talking about it.  The PCT is luring us with its siren song and the proximity of this portion and our familiarity with both Stevens Pass and Snoqualmie Pass makes it an excellent starting point.

Master Nutrition and Hydration for Races

After repeatedly reviewing and analyzing what could have caused my stomach cramps at the Portland Marathon, I narrowed it down to two factors: (1) a GI issue that I’ve been taking medication for which was (2) exacerbated by not getting enough electrolytes. My stomach has been behaving better since I minimized my consumption of beans, milk, tomatoes, and cruciferous vegetables, so hopefully that won’t be an issue during racing. Now, I just need to master fueling and hydrating, especially in terms of electrolyte.

I did not take any Nuun in the hours or the day before the race because, honestly, I just hadn’t been enjoying Nuun lately nor was it agreeing with my stomach. I really wanted Nuun to work, since I was an ambassador for their amazing company and so grateful for that opportunity, but I also know that I cannot stick with a product if it doesn’t work for me. I cut out Nuun completely a few weeks ago and am searching for an alternative electrolyte source. I’m also wondering if GUs aren’t the best for my stomach: they work well for training, but seem a bit too harsh during the stress of race day. I ran my first race using Hammer gels, so I’m considering returning to those and using SaltStick or EnduroPacks.

Over the course of this month, I have participated in Marketing Academy for Endurance Coaches with the brilliant Heather over at FitAspire to learn how to market and grow my run coaching business (and I highly recommend it to any bloggers/coaches out there!). In 2016, I hope to put these principles into practice and cultivate a client base of runners who want to achieve their personal best, whether that’s running their first race or first marathon, earning a PR, or qualifying for Boston. My first focus will be on getting clients to coach individually; from there, I want to develop downloadable training plans as my most basic level of coaching and eventually put together training groups and write another e-book.

Want to work with me as your running coach to achieve your running goals for 2016? Email me at [email protected] and visit my coaching page for more information!

I am in a bit of a rut with my Pilates practice, as in, I’ve been doing the same five Pilates DVDs since college. I also heavily followed the Gaiam school of Pilates and am curious to try other styles. In 2016, I want to try different schools of Pilates (particularly Stott Pilates) and incorporate new Pilates workouts into my weekly training. Additionally, I want to stay consistent in doing Pilates at least once a week, unlike last year where I would skip Pilates for a few weeks at a time.

@thisrunrecipes shares her 2016 #running goals! What are your #goals for 2016? #fitfluential #sweatpink

What are your 2016 goals and your plans for achieving them?
How can I help you achieve your goals in 2016?

How many miles should you run per week? Weekly mi

Are you planning your races for the new year? I've

How do you fuel during a half marathon? Swipe and

Theory: a little bit of variety goes a long way in

Whether you love it or dread it, winter running do

Looking to hire a running coach in 2023? Run coac

Understanding the Psychology and Physiology of Running Motivation

A Short and Simple Guide to Yoga for Runners

How to Pick the Best Trail Running Shoes For You

Read More »
How many miles should you run per week? Weekly mi

Are you planning your races for the new year? I've

How do you fuel during a half marathon? Swipe and

Theory: a little bit of variety goes a long way in

Whether you love it or dread it, winter running do