In my recap of week 1 of Portland Marathon training on Monday, I promised I would share a treadmill hill workout with you! I did a six mile run with rolling hills (0.25 mile climbing 3-7%, 0.15 mile at 0%) and climbed nearly 700 feet, which is a lot for my flatlander legs! I modified the workout to make it easier to remember (because who likes complicated workouts?) and am sharing it with you today!

The biggest mistake I made in my training for the Go! St. Louis Half Marathon was not doing enough hill training. By the end of that race, my quads felt shredded, my hip flexors were burning, and I had finished 3 minutes slower than my goal time.

Where I had trained for that (Valparaiso, IN, a suburb of Chicago) was flat. The nearest “mountain,” which is Mt. Baldy at the Indiana Dunes, could serve as an easy warm-up for some of the hills out here, especially in the Issaquah Alps or in downtown Seattle. Hill training in Valpo left me with two options: running up and down a hill on the busiest street in town (pass, Valpo drivers are like Chicago drivers) or adding hills in on the treadmill…which I barely did.

I anticipated that once we moved to Seattle, I would be running on super hilly routes every day. After all, downtown Seattle is the type of place where you drive with one foot on the gas and one foot on the break. 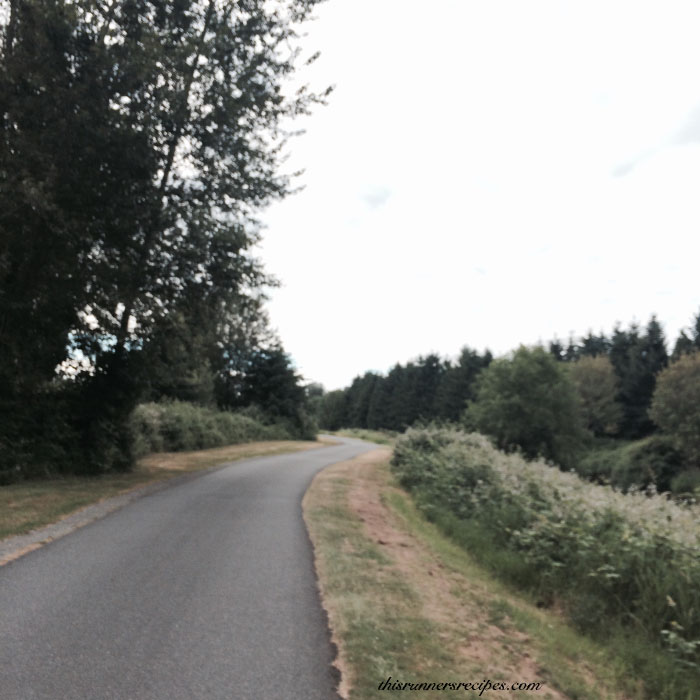 So beautiful, but so flat as it’s right along a river.

Surprisingly, the Eastside of Seattle is flatter, at least on the major running path. Since most of the paved running trails follow a body of water and are made for cyclists, these paths have very variation in their terrain and all of my runs end up with very little uphill or downhill running. There are plenty of hills near me, but again, they are all on very busy roads and Seattle drivers are more unpredictable than Indiana drivers.

So, while I continue to search for a safe and hilly route nearby, I have been utilizing the treadmill for my hill training. While the treadmill is never a perfect match for outdoor running, the option on most treadmills to go up to a 15% incline does offer a desirable alternative for those who do not have easy access to hilly routes.

The Portland Marathon is not a hilly marathon by any means, unless you’re comparing it to the pancake-flat Chicago Marathon. Still, I’m including hill training in my marathon training in order to strengthen my lower body muscles, build speed, increase my fatigue resistance, and overall have a better race.

The Benefits of Hill Running

What are the benefits of hill running?

There are three primary hill running workouts: hill sprints, hill repeats, and rolling hills. Hill sprints are short and intense efforts, such as 20 x 15 seconds sprints up a 10% incline. Hill repeats are longer, but are still anaerobic, such as 8-10 repeats of 2 minutes at 5K effort or 5 minutes at half marathon effort up a hill. Rolling hills are exactly as they sound: running up and down moderate to steep hills for an extended period of time at an even effort.

This treadmill hill workout features rolling hills from a 3%-6% incline, with 0% incline used as a substitute for downhill running. After a mile warm-up at 1-2% incline, you will run up a hill for ¼ mile, then at 0% for a quarter mile. Each hill gets progressively steeper until you take a quarter mile recovery and then start climbing all over again.

If you want to make this workout more challenging, shorten the recovery/downhill portions to 0.15 of a mile, raise the incline even more, or go for longer. Each hill cycle is about 2 miles, so you can customize the duration of this workout. If you’re a newer runner, do only one hill cycle or lower the inclines to make it easier.

Pick an easy pace for this run, as you want to be able to maintain the same speed throughout the entire workout. Aim for about 1 minutes to 90 seconds slower than marathon pace (or roughly 2 minutes slower than 5K pace); if you don’t have a recent race time, keep the pace the same as your normal easy run pace.

Questions of the Day:
How do you include hills in your training?
What’s your favorite workout to do on the treadmill? —> Hills or shorter speed intervals for me!