This week’s recipe of choice is baked falafel, and Meredith and I tried two different recipes (you can see hers here). The subtle variations in falafel recipes are remarkable: binders vs. no binders, gluten free vs. containing flour, baked vs. fried, dried chickpeas vs. canned chickpeas.

Cooking is a science, which is why I love it: it’s chemistry you can eat.

Chemistry was one of my favorite subjects in high school, along with English and history. I studied the latter two in college and grad school and I channeled my love for chemistry into baking and cooking.

The humanities were such a subjective field that tinkering with the objectiveness of recipes and ratios was relaxing. (This was also when I quickly fell in love with running and all the science behind it). I engaged a different part of my brain and the end result was always something I could eat.

Chemistry and ratios certainly impact baking. While cooking is a bit more adaptable and less rigorous in terms of following a recipe, those ratios still apply in certain recipes.

Ideally, falafel is made with dried and rehydrated chickpeas, since these have less moisture in them. However, when I went to make falafel for this week’s recipe vegetarian challenge with Meredith, I realized I only had canned chickpeas on hand.

Like cooking, chemistry is a balance of ratios. In the case of recipes like falafel, the ratio that requires balancing is wet to dry. Since canned chickpeas have more moisture (even after draining and rinsing), you need to increase the amount of dry ingredients.

One of the reasons that, as I mentioned last week, How Sweet It Is is my favorite food blog is because she knows her ratios. I’ve never tried a recipe of hers that produced an inedible catastrophe. Her recipe for baked falafel with spicy feta sauce– which was the recipe I decided to use for this week’s recipe challenge of falafel – didn’t disappoint.

Falafel is one of my favorite vegetarian meals, as Mediterranean food is one of my favorite cuisines. Chickpeas tend to be easier to digest than black or kidney beans, and the processing of the whole chickpeas into patties and then cooking them makes them easier to digest, which means you can enjoy a meatless meal without having to plan your next day’s running route based on bathroom locations. 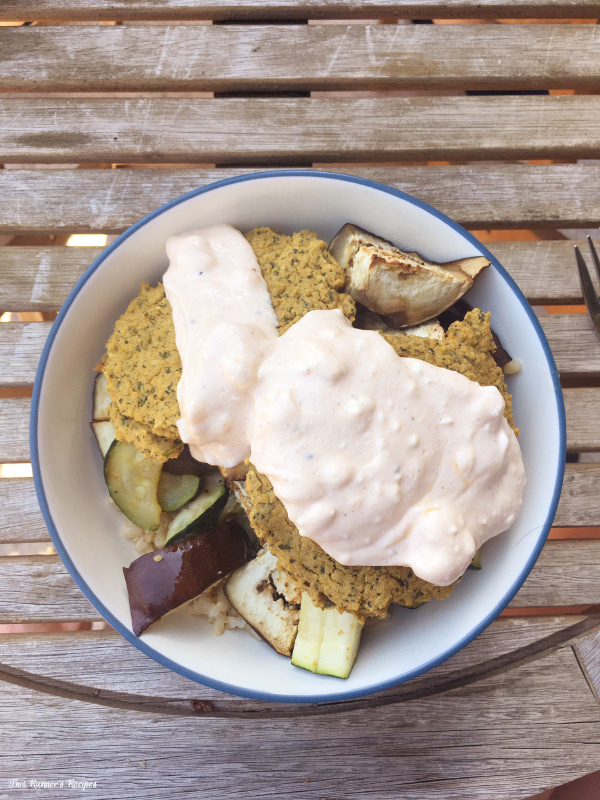 Preparation: This recipe was easy to prepare and took probably 35-40 minutes to make. A good portion of that time came from picking the skins off the chickpeas (a trick I learned from Smitten Kitchen’s ethereally smooth hummus recipe). Beyond that, the steps are quick and simple: pulse the ingredients together in a food processor, form into patties, and then bake for 20 minutes.

With time spent baking brown rice (which cooked at a different temperature) and roasting zucchini and eggplant, I had dinner ready in under an hour – which can be significantly shortened if you prepare your rice ahead of time or serve the falafel with pita.

Falafel is a great vegetarian food to prepare ahead of time in a large batch. Ryan and I both enjoyed this recipe as leftovers the next day for our lunches and the falafel held together even after refrigerating and reheating (unlike last week’s black bean burgers).

The only modification I made was excluding the parsley and green onions (like last week, I forgot to purchase them) and instead I doubled the amount of cilantro.

Taste and texture: This baked falafel recipe resembled authentic falafel (minus the greasiness of some fried falafel): herby, garlicky, dense, and chewy. The patties didn’t crumble or taste overly earthly. They were a satisfying meal, even for Ryan after he completed a hard weight lifting workout – and definitely a recipe worth repeating in terms of taste.

If you make this recipe, do not skip the whipped feta sauce. I roughly halved the recipe and it produced plenty of creamy, tangy, spicy sauce. The feta sauce may not be the most photogenic, but I’ll take a delicious meal over an Instagram-staged meal any day.

Nutrition: According to Myfitnesspal, the falafel itself (not including the feta sauce) contains 14 grams of protein (yes!), 45 grams of carbohydrates, 8 grams of fiber, 8 grams of fat, 22% of daily iron needs, and only 6 grams of naturally occurring sugars. These nutritional stats make me very happy, especially the amount of protein.

What were your favorite subjects in high school?
What new recipes did you try this week?