We may compete as individuals in running, but seldom are our achievements only the fruit of an individual effort. The Leaf Peeper Half Marathon, ran as part of the Rise.Run.Retreat, demonstrated to me the power that a community of support, like-minded, authentic, and talented runners can have on your own training and racing.

On paper, the Leaf Peeper Half Marathon in Waterbury, VT was my hardest and slowest half marathon. I even walked a bit at mile 2.5-3. In the world of social media and running blogs, a temptation exists to equate slowest with worst. But with this race, what appears in the race results doesn’t share the full story.

The Leaf Peeper Half Marathon is one of my favorite race experiences yet – because of how these women inspired me to run well a tough course, because of the strength I tapped into at the end, and most of all because of the miles shared together. Honestly, I could not have run as strong of a race as I felt I did if it were not for Sarah, Sandra, Jes, Angela, Allie, Kara, Sue, Christine, and Natalie and their encouragement and the inspiration from how they poured their own hearts and bodies into this race. 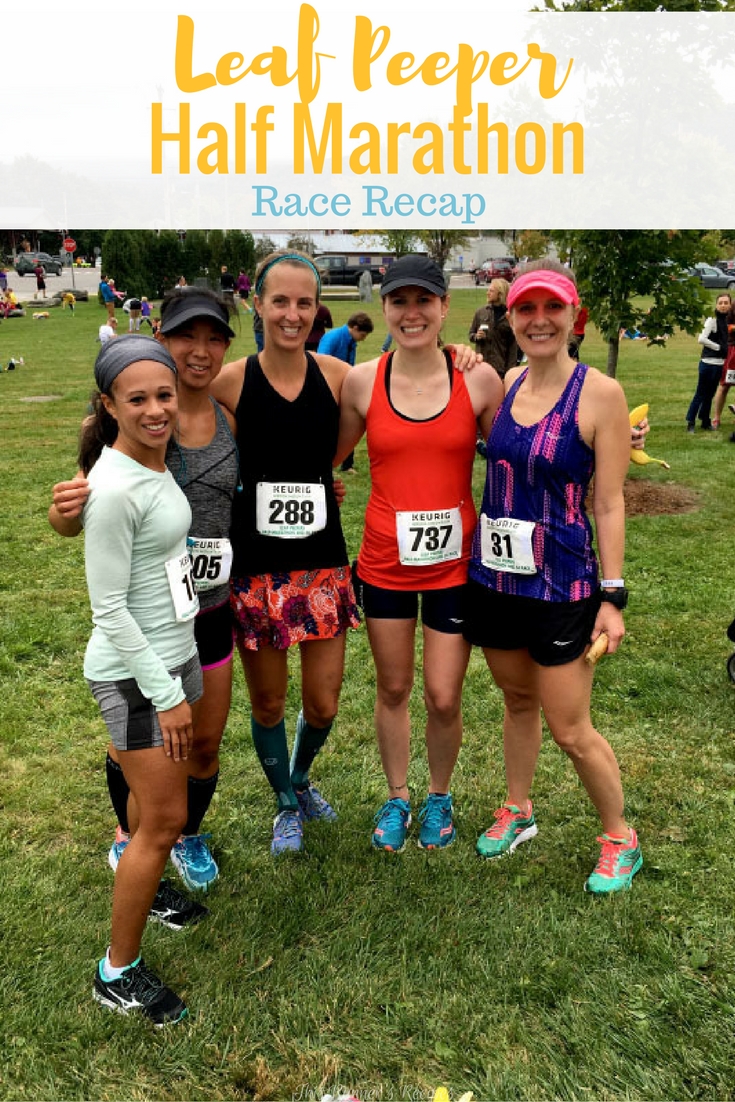 The race started at 11 AM, which was later than most races but it allowed for a leisurely final morning of the retreat. I had been more relaxed than normal with my pre-race nutrition – including eating foods I normally avoid in the week before a race, such as ice cream, pulled pork tacos, and kale salad.

The morning of, I ate a plain bagel with peanut butter, a banana, and a couple cups of coffee about 3 hours before the race. I usually forgo peanut butter before a run in order to avoid GI distress, but with the late start time I didn’t want to get hungry before the race.

A few of us started on a pre-race warm up jog and suddenly I felt a slight tight spot in my right hamstring. I had minorly tweaked this hamstring in the summer after I had sprained my right foot. I imagine flying plus the hilly terrain led to just some stiffness, but I was not taking chances. Thankfully, I had packed KT Tape in case of this exact scenario, so 10 minutes before the race I applied it and said a little prayer.

All things considered – my hamstring, my eating of foods I normally avoid before a race, the daunting hills – there and then I let completely go of expectations. My plan was to start conservatively and take the race one mile at a time.

The Leaf Peeper Half Marathon was both well-organized and laid-back. Bib pick-up took just a couple of minutes, they provided plenty of porta potties, and the course was clearly marked. About five minutes before the race started, we seeded ourselves around the start line.

There were no medals at the end of the race. We received a T-shirt and spaghetti sauce – which was more than enough for me. I prefer well-organized races with dedicated and kind runners over any fancy bling. The post-race spread offered simple yet delicious foods with local bagels, apple cider, Cabot Cheese, and bananas – exactly what you want after pushing hard for 13.1 miles. I appreciate it when races know how to feed runners!

The course was picturesque yet not for the faint of heart. The Leaf Peeper Half Marathon featured some brutal hills – including a 17% climb.We climbed just over 1000 feet (according to the course map and my Garmin), most of which was over the first three miles. Ryan’s and my hike the previous weekend had half of the elevation gain of this race!

I ran the first three miles with Sarah. For those of you who do not follow Sarah on her blog or Instagram, she is kind, friendly, fast, and a remarkably talented hill runner. She coached me through how to run powerfully uphill as we tackled climb after climb. I was so grateful for her companionship and advice! She helped me power up those steep inclines – faster than what I would have expected I could do on hills like these.

The ominous hill which stirred pre-race nerves in all of us at dinner the previous night came into full force just after mile two. We climbed, climbed, and climbed some more – with no crest in sight.

I walked up a bit of the hill before catching up again with Sarah. Yes, I walked – within the first 5k of a half.  I didn’t want to smoke my legs and slog through the rest of the race, so I took short walk breaks up the steepest hill. It is certainly humbling to walk that early in a race, but I had told myself to take the first 5K conservatively. (And also – a 17% incline is no easy feat. I am in awe of Allie and Sarah who were able to run up the entire thing.)

Sandra joined us soon, and then Sarah started her tempo miles and zoomed away with ease. Meanwhile, the scenery made it well worth the climb: vibrant fall foliage, adorable country farms, and more hills looming in the background, their peaks disappearing into the fog.

I honestly considered pulling out my phone for photos, but I had my rental car keys, ID, and phone all in the same pocket. Visions of dropping my car key and ID on the course and not being able to get home prevented me, so instead I just enjoyed the views without trying to fit them inside an iPhone camera frame.

Sandra and I ran together through mile 9, keeping a comfortable pace, chatting, and cheering on the other women as we saw them along the out and back portion. I had such a wonderful time running with Sandra – this was definitely one of my favorite memories of the day.

We saw Jesica (who is in her second trimester) at mile 5, cheering us on and taking photos. Then, we started to spot the other women along the out-and-back portion: first Allie, who was making it look easy, then Sarah with her flawless stride. Once Sandra and I made a tight hairpin turn, we saw Angela, Christine, Kara, and Sue and Natalie running together – and cheered on each one.

Sandra encouraged me to break away at mile 9, so I did. I had no finish time in mind nor did I have a pace to hit – but my legs itched to move faster, so I let my effort increase.

Amazingly, my pace dropped down to the 7:30s – which was my average pace for my pancake-flat PR half marathon back in March. I did not expect my legs to have that pace in them, after the long flights, miles of marathon training, and most of all those hills.

I saw Jes again at mile 10 and her words of encouragement gave me the boost I needed to give my best over the final 5K. She is such a positive, supportive woman!

(And yes – I have my Enduropacks spray in my pocket again! It’s so easy to add to water during a race, since I didn’t want to rely on Gatorade for electrolytes.)

Just after I completed mile 11, I looked up and saw yet another hill coming up. While this hill was a mere blip on the elevation gain, it was a 6-7% incline. So yet again, up I ran – but with just a couple miles left to go I thought “why not push it?” I focused on short, quick steps like Sarah recommended and powered as best I could up that hill.

My last full mile was a 7:01, the fastest mile I have ever run in a race. The mile did include downhill, flat, and a slight little uphill – and I was astounded at myself. I kicked it up to a 6:40-ish for the final push and crossed the finish line with a net time of 1:47:55 (average pace 8:15/mile).

I quickly met up with Allie and Sarah and we cheered as the other women cross the finish line. I was elated: I was proud of how I ran the race and so happy and grateful to be experiencing a race with such amazing women. I eagerly texted Ryan as soon as I could to let him know my time – above anything else, I always want to make him proud with my running.

The hills were atrocious BUT at the same time, I sort of liked them. Or at least, I enjoyed the companionship through the race, the scenery at the top of the hill, the downhills, and the deep sense of accomplishment that comes from doing hard things.

My flight left late afternoon, so I had to say goodbye to everyone and leave for the Burlington Airport. Thankfully, the retreat swag bags included recovery gear such as SKINS Compression Leggings, Eureka Balm, and Tiger Tail rollers. I changed into the leggings and rolled my sore muscles out while waiting for my flight. Recovery matters just as much as running, and these simple steps made the flights so much more comfortable.

When have other runners inspired and encouraged you in a race?
When did you last surprise yourself during a run?