The longer I run, the more I realize the importance of community. Running may be an individual sport in terms of competition, but runners often thrive within a vibrant community. In the fall of 2016, I attended the Rise.Run.Retreat, hosted by Sarah Canney, and I knew I wanted to return to a future retreat. The Rise.Run.Retreat is a women’s running retreat, focused on fostering friendships while enjoying a rejuvenating weekend devoted to all things running in the mountains of Vermont.

The Rise.Run.Retreat offers female runners the opportunity to foster real-life relationships in an age where so much of our interaction is online. The retreat also features speakers, including elite runners, nutritionists, and strength coaches to help you improve your own running. By the end of the weekend, you finish feeling refreshed, inspired, and more connected with the running community.

This year, the spring offering of the Rise.Run.Retreat took place on Thursday, May 17 through Sunday, May 20, in Woodstock, Vermont. The retreat was secluded in the moutains but close enough to local airports (Lebanon, New Hampshire, Manchester, New Hampshire, and Burlington, Vermont) for travel. (I took a flight from Seattle to Boston and then a prop plan from Boston to Lebanon.)

Thursday began with a shake-out run, drinks and appetizers under the shadow of a mountain, and a catered dinner of salmon, quinoa stuffed cabbage rolls, and salad.

Friday began with a run, followed by a delicious breakfast of scrambled Pete & Gerry’s eggs, Stonyfield yogurt, and GrandyOats granola.

Our speaker of the day was Stephanie Bruce, an elite runner with a marathon PR of 2:29 and a mother of two. Stephanie spoke authentically about life as an elite runner, her family, how she finds inspiration in the Rocky movies, her viral postpartum photo, the London Marathon, and her upcoming plans and dreams. Stephanie’s talk was a highlight of the treat, especially since she joined us on both for our run and for the afternoon strength session.

Warm temperatures and clear skies graced us on Friday afternoon, so our strength training session took place outside, in the shadow of the hill behind our retreat house. Crystal Seaver led a 60-minute strength session, which consisted of four circuits of bodyweight and mini-band exercises. After the workout, we stretched with the Trigger Pin Vector roller, which is my new favorite piece of recovery gear.

On Saturday, NPS employee and runner Rebecca guided us on a breath-taking trail run through Marsh-Billings-Rockefeller National Park. After the run, we enjoyed a delicious lunch at Long Trail Brewery. A highlight of the brewery was, of course, their beers; I enjoyed a piney IPA.

Following lunch on Saturday, we listened to functional nutritionist Erin Holt speak about the problems of undereating, how to cultivate the right mindset to eat intuitively, and breaking free of the diet mentality. Erin’s presentation was fascinating, engaging, well-researched, and incredibly informative. 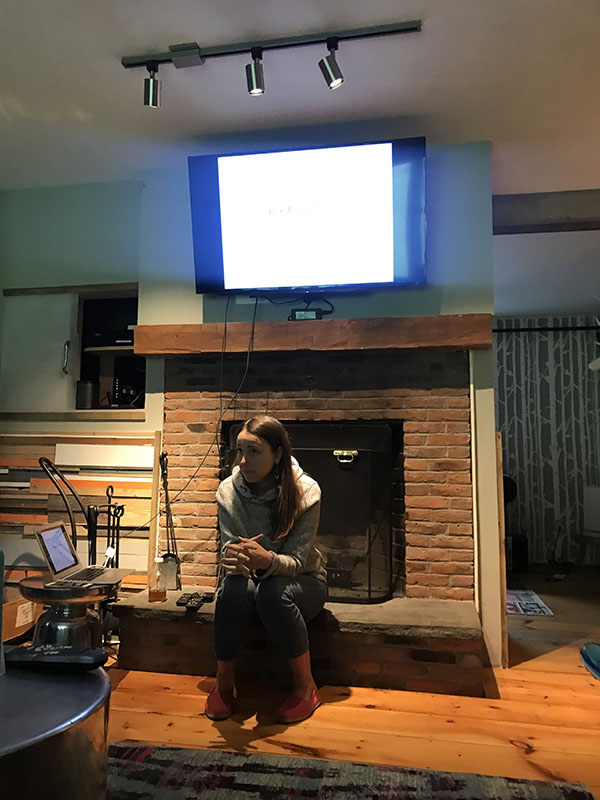 Sunday concluded the retreat with restorative yoga after our run. Our instructor Kristel was one of the best yoga instructors I’ve ever encountered; for someone who prefers Pilates, I found her workout to be accessible and enjoyable. After yoga, we enjoyed brunch and said goodbyes before departing.

Between presentations and runs, we enjoyed delicious catered meals, the scenery of Vermont, and, most importantly, wonderful conversations and connections with each other.

And of course, before our run on Saturday, we watched the Royal Wedding!

A running retreat would not be complete without runs! Each day of the treat featured an optional run of varying distances and on various terrain.

Thursday began with an optional shake-out run, which felt rejuvenating after a red-eye flight from Seattle to Boston. Our route was simply along the country road by our retreat house, a short out-and-back of 20 minutes total.

On Friday morning, we ran throughout downtown Woodstock. Stephanie Bruce joined the group for part of her run and we weaved through the historic downtown, ran across covered bridges, and up some Vermont hills. The retreat offered a 3 mile and 4.5 mile loop and I ran with most of the group on the 4.5 mile loop. Stephanie Bruce joined on this run, which made it extra special.

Our Saturday run was one of my favorites from this trip. Rebecca, an Oiselle Volee member and National Parks employee, guided us through the Marsh-Billings-Rockefeller National Memorial Park. She shared the history of the park while leading us along the Pogue (a pond) and then up the top of Mt. Tom for views of Woodstock. The 4.25 mile run was mostly on a crushed gravel carriage trail. We snapped photos and marveled at nature before descending back down the mountain.

Sunday offered the opportunity for a sunrise trail run up Mt. Peg, which I took advantage of. Five of us ran a mile up to the top, treading over roots and rocks as we ascended the switchbacks. This run may have been short, but it was stunning both during the climb and at the top.

Being able to run trails with other women was a highlight of this trip. I’m nervous to run trails by myself, but having a group made the trails feel safer. The relaxed environment of trail running facilitated great conversations and connections.

Our breakfasts were provided by Stonyfield, Nuttzo, Cabot Cheese, Pete & Gerry’s Eggs, and GrandyOats, and Long Trail Brewery hosted one of our lunches.

A huge thank you most of all to Sarah Canney, who organized the event, Rebecca, who led our trail runs, the presenters Stephanie Bruce, Crystal Seaver, Erin Holt, and Kristel, and to our incredibly generous sponsors!

You can find the Rise.Run.Retreat on Facebook, Instagram, and Twitter. The upcoming offerings of the Rise.Run.Retreat include a training camp featuring Mary Johnson of Lift Run Perform and a race meet-up at the Seacoast Half Marathon, featuring a live podcast recording with Lindsey Hein of I’ll Have Another.

Linking up with Weekly Wrap!

Have you ever attended a running retreat? Would you attend one?
Where would you love to visit on a trip soon?